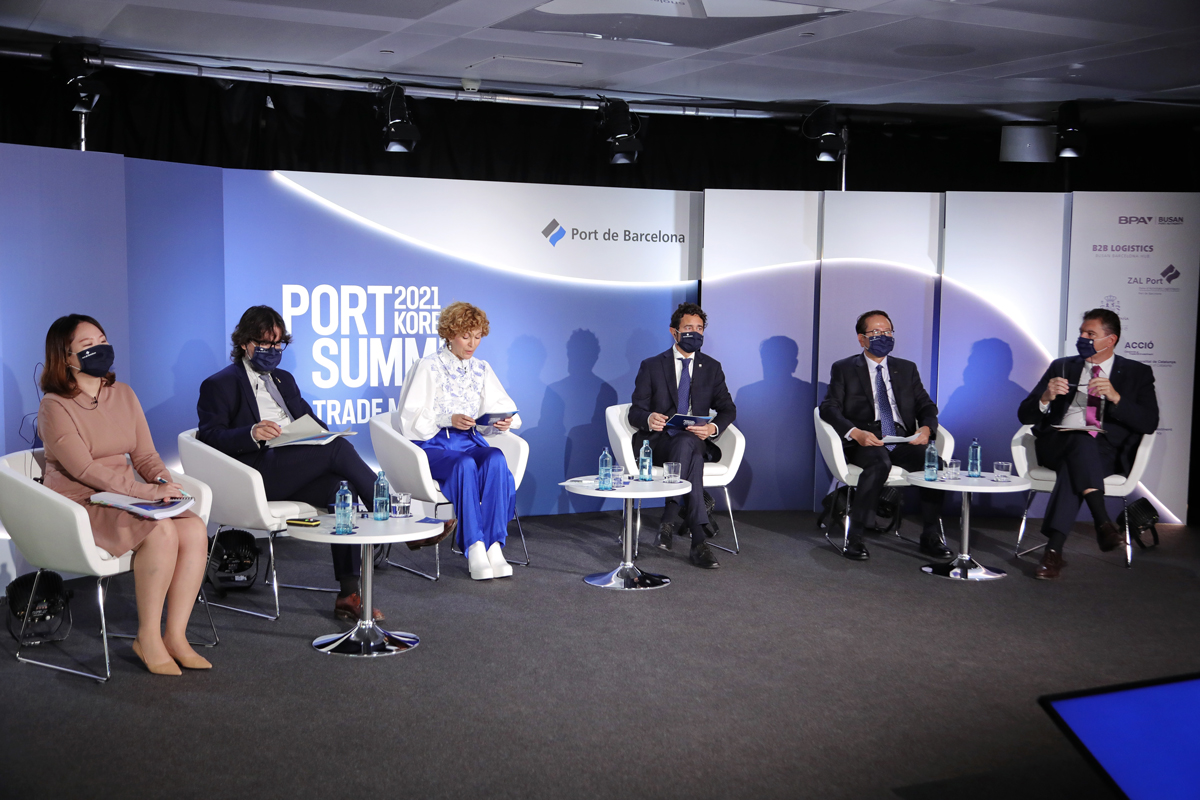 “Our advanced logistics services, our direct rail links with the heart of Europe, unique in the Iberian Peninsula, our customer orientation and the exclusive logistics platform for Korean companies that we are opening today certainly make us the best logistics option for Korean companies in Southern Europe and the Mediterranean”.
This was the resounding statement made today by President of the Port of Barcelona, Damià Calvet, at the opening of the Port Summit Korea 2021, an event in which he was accompanied by the president of the Port of Busan, Kang Joon suk; the deputy director of the Ministry of Oceans and Fisheries of Korea, Su-yeon Kim; the Spanish ambassador to the Republic of Korea, Juan Ignacio Morro; the General Secretary of the Department of Vice Presidency and Digital Policies and Territory of the Generalitat de Catalunya, Ricard Font; and the Commissioner for Barcelona Promotion, Pau Solanilla.

Damià Calvet has assured Korean companies importing and exporting through the Port of Barcelona that they will have “the most economically, environmentally and socially sustainable and the most competitive logistics chains”, in line with “our mission, which is none other than to generate prosperity in the community, increasing our customers’ competitiveness through the efficient and sustainable provision of logistics and transport services”.

The Port of Barcelona aims to be the logistics partner for Korean companies in foreign trade between Korea and the Iberian Peninsula. This is completely natural, since 34% (in value terms) of all goods transported by sea between Korea and Spain currently pass through the Catalan hub.

Damià Calvet recalled that “customer orientation has been a clear commitment of the Port of Barcelona for years. We adapt to their needs for transparency, information, traceability of goods, agility, price and reducing the carbon footprint of logistics chains”. Furthermore, Barcelona is a key intermodal node for foreign trade, acting as a gateway for European exports to other destinations such as Asia. “And it is also the logistics partner in Europe for foreign companies, such as those from Korea, helping them to enter the EU market, whose more than 500 million consumers make it the bloc with the greatest purchasing power in the world”.

The Port of Barcelona’s strategic location has been fundamental in realising the logistics platform with the Port of Busan, an attractive “collaboration between port authorities to connect Northeast Asia and Southern Europe and to support companies wishing to trade”, explained the president of the Korean port during his speech at the inauguration of the Port Summit. In Kang Joon Suk’s opinion, “this is the perfect time to launch this platform and to exchange knowledge and look for innovations in customs and logistics and in many other areas”.

In this connection, the deputy director of the Ministry of Oceans and Fisheries of Korea was convinced that this Port Summit Korea 2021 “will promote exchanges between our companies and ports” and underscored the key role of logistics in the international context. “Logistics is the foundation of global economic development. For Korea, maritime logistics is very important and is key to our growth,” said Su-yeon Kim.

Korea and Spain are two powerful economies that are at similar levels internationally: Korea is the tenth richest country in the world in terms of Gross Domestic Product (GDP), while Spain is ranked 14th. However, trade relations between the two countries, as well as reciprocal investments, still have a long way to go. “Without any doubt, the time has now come for us to mark a turning point in our bilateral relations,” underlined Juan Ignacio Morro during his speech.

The Spanish ambassador to Korea admitted that “we must improve our business presence in Korea” and underscored that “Catalonia is a magnificent option in this regard”. Both Korea and Spain have opted for environmental sustainability and technology to transform their economies, and concrete plans are now being developed to offer greater opportunities to our companies. “Cooperation agreements between the ports of Busan and Barcelona are a magnificent example of this trend”, concluded the ambassador.

The General Secretary of the Vice Presidency and Digital Policies and Territory of the Catalan Government, the Generalitat de Catalunya, agreed with Juan Ignacio Morro on the importance of technology for economic development, adding that Catalonia and Korea “share business values of innovation, entrepreneurship and a desire to open up globally” while firmly stating that this country “is a benchmark economy for us”. Ricard Font recalled that “we are in the midst of a significant climate emergency, which is one of the main challenges we face as a society” and highlighted that “the Port of Barcelona has defined a very clear strategy in terms of sustainability”.

Barcelona’s Promotion Commissioner announced that work is underway “to recover the six direct weekly flights between Barcelona and Korea that we had before the pandemic” since a direct connection to a key economic area is key to strengthening business relationships. This air connection, along with the alliances that the Port of Barcelona is forging with Korea, will allow it to consolidate its relationship with this Southeast Asian country and to expand this rapport with new horizons and new challenges.